What is the meaning of Ovulation induction and intrauterine insemination?

What is the meaning of Ovulation induction and intrauterine insemination?

There are variegated problems that eventually result in female infertility. A gynecologist in Punjab is of the viewpoint that for many women who are suffering from infertility, the main reason behind their infertility is the variegated ovulation problems. According to the research conducted in an IVF centre in Punjab, there are many possible reasons for a woman to suffer from the problem of ovulation.

Ovulation can be defined as the initial stage of the journey of conception. Ovulation is actually referred to as the phase in which a full-fledged developed egg is released or discharged from the ovaries. This egg is then transferred to the fallopian tubes. In the fallopian tubes, this matured egg is supposed to be fertilized by the sperms. If the sperms are successful in making the egg fertile, then the next stage incorporates the shifting of the fertilized mature egg which is called embryo at this stage to the uterus, where it is nourished. If there has been successful implantation of the embryo in the uterus, then the female is said to be pregnant.

Ovulation induction is nothing but a method in which by making use of certain fertility medications, the effort is done to make the reproductive system work in a way that discharges more than one egg which may help in the conception.

The ovulation induction method is customarily put to use in the case of those women who are not being able to get pregnant because of the crooked menstrual cycle and usual fluctuations in the ovulation cycle. Fertility medications play a crucial role in this procedure. The motive is to make the reproductive system function in a way that the hormones are incited to carry out the egg production.

there are customarily two kinds of fertility medications which are listed below:

These are usually the first resort or attempt which is done to trigger pregnancy in a woman. Those women are particularly targeted who are facing crooked ovulation.

If after taking oral medications, the women are not able to ovulate, then injectable medications are used.

Intrauterine insemination is a modus operandi in which the semen is supervised and meticulously prepared in a way that the separation of best sperms is done which are capable enough to trigger the pregnancy in a woman by being transferred in the uterus for fertilization functioning. 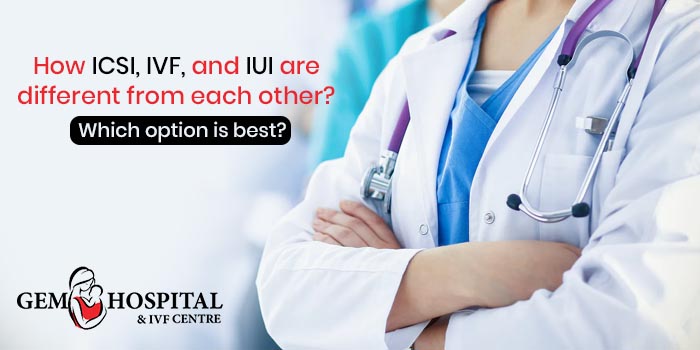 IVF Or IUI: Which One Is The Best Infertility Treatment For You?

How ICSI, IVF, and IUI are different from each other? Which option is best?